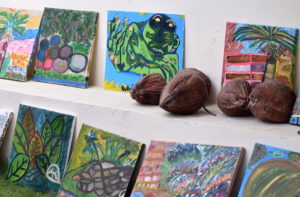 Students of All Ages Create the Salinas Family Art Center

An article written by Barbara for her monthly newspaper in Montreal called The Senior Times, details both the development of the children in their classes with Barbara and John and the first Art Show, which turned into a family art love-in with moms, dads, siblings and cousins all trying their hand at pastels and colored pencils. (See http://www.theseniortimes.com/times-and-places-teaching-art-to-children-more-fulfilling-than-i-could-have-imagined/)

Because there are currently no arts programs in public schools as part of the standard curriculum, it is Barbara’s and John’s dream to bring a variety of arts experiences to Ecuadorian children who otherwise would not have the opportunity to discover their talents and voices. This aligns with Trifecta Arts’ mission to support and expand performing and visual arts educational opportunities in underserved areas around the world, thus opening the door for our partnership.

John is ready to be the primary instructor responsible for teaching classes in both visual arts and performing arts, while Barbara will continue to visit Salinas twice a year to participate in defining and expanding the Salinas Family Art Center. The goal for the Center, once established, is to become a space where students of all ages in this area of Ecuador find a secure and comfortable place to express themselves artistically and to explore visual arts, music, dance, and theatre. They will learn the art of communication and develop as whole students through the arts.

The Salinas Family Art Center needs financial support to facilitate its growth and develop the talents of its next generation of artists, keeping in mind that the residents of this area have very little, if any, disposable income.

How you can help

By donating through Trifecta Arts, Inc. you will help us build up an operating fund that will allow the Salinas Family Art Center to commit to a 12-month lease (est. $500/month). Additional donations are also needed to support an instructor’s salary, which we expect to ramp up to full time by the end of 2017 (est. $600/month).

We are aiming for an Initial Goal of $8,000 to transform the Salinas Family Art Center dream into reality!

Please help us by donating whatever amount you can – either a one-time gift or a monthly reoccurring donation. Large or small, every donation helps expand this wonderful project to include more students.

Note: Barbara Moser has committed her ongoing support for all art supplies and a monthly contribution towards operation of the Salinas Family Art Centre.  Additionally, continued Art Show Events may also assist by sharing proceeds between the artists and the Centers’ facility expenses.

Barbara Moser has been painting since she was 11, and has recently retired from teaching literature and journalism at Dawson College in Montreal. She is founder and publisher of The Senior Times newspaper, a 30-year-old monthly publication aimed at her generation and in it, writes about her experiences travelling and living in Ecuador with particular attention to redirecting her readers to fulfill their passions in later life. The newspaper can be viewed at www.theseniortimes.com

John Briceno Castillo immigrated from Colombia in 2012, where he was trained as an actor, stuntman and studied theatre at the university level. As a stuntman, he worked in movies for a Colombian television production company. He is also a visual artist. John previously worked for a foundation in Bogota that helped children with learning disabilities and was involved in a theatre group that held poetry recitals. John founded a group for adolescents in Cali, a smaller city, to create awareness about ecology, culture and peace. The group planted trees and learned to love and respect nature. He loves to teach children and adolescents some of the skills and talents he has acquired in voice, expression, and communication.

The pictures shown below are from classes and previous art exhibits.

If you’d like to make a donation directed to this Initiative, please complete the Donation form below.

If you would like to donate to our General Fund, select *DONATE* from the menu at the top of the page. 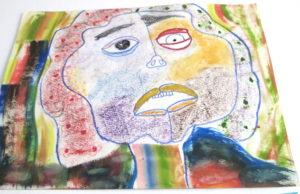 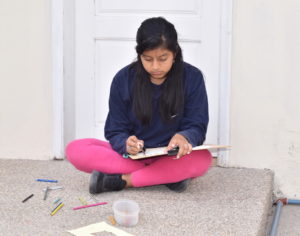 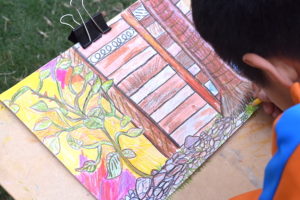 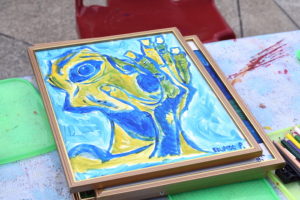 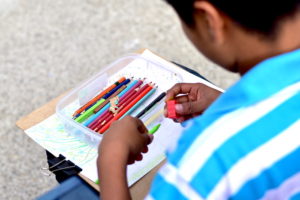